money is not the root of all evil, money IS evil 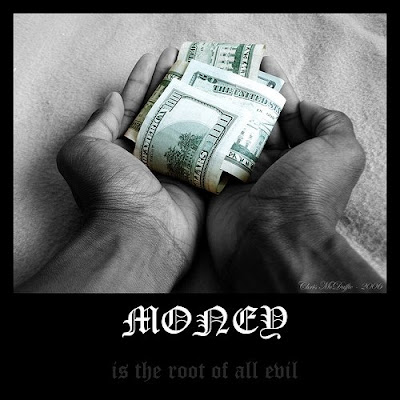 Over the past 4 or 5 years, I had begun to nurture the idea that renovating my relationship with money as a concept would bring me prosperity. I am afraid now that there is no such thing as true prosperity based on a system of enforced scarcity.

Perhaps those who distrust the concept at it's core are not simply conflicted due to inherited imbalances with success or prosperity...perhaps we simply feel conflicted about a system that is built upon the necessity of the suffering of a percentage of the population of our human brothers and sisters. In order for the system of money to work, there must be a limited amount. Money is a rationing system which has no self-regulating component whereby balance or equality is served.

(From designing the future by Jaque Fresco:) 1. Money is just an interference between what one needs and what one is able to get. It is not money that people need, it is access to resources. 2. The use of money results in social stratification and elitism based primarily on economic disparity. 3. People are not equal without equal purchasing power. 4. Most people are slaves to jobs they do not like because they need the money. 20 5. There is tremendous corruption, greed, crime, embezzlement, and more caused by the need for money. 6. Most laws are enacted for the benefit of corporations, which have enough money to lobby, bribe, or persuade government officials to make laws that serve their interests. 7. Those who control purchasing power have greater influence. 8. Money is used to control the behavior of those with limited purchasing power. 9. Goods such as foods are sometimes destroyed to keep prices up; when things are scarce prices increase. 10. There is tremendous waste of material and strain on available resources from superficial design changes for newer later fads each year in order to create continuous markets for manufacturers. 11. There is tremendous environmental degradation due to the high cost of better methods of waste disposal.

The Earth has abundant resources and our practice of rationing these resources through the use of money is an outdated method which causes much suffering. It is not money that we need but the intelligent management of the earth’s resources for the benefit of everyone. We could best work towards achieving this by using a resource based economy.
http://www.thevenusproject.com/media/downloads/A-DesigningtheFutureE-BOOK.pdf
Posted by Meghan Wolf at 7:58 AM 2 comments: