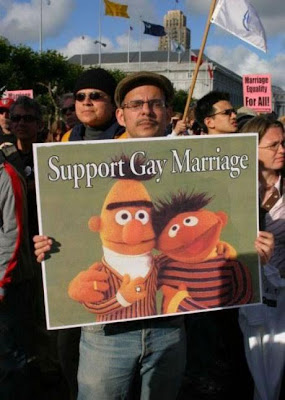 Regarding the controversy spurred by Prop 8, Huckabee and other "righters" keep talking about "creating the next generation"- do these people not understand that we have a population crisis on our hands?

On what is this camp basing their thesis that a same-sex couple cannot parent as well as a man and a woman? Where is the data to back that up? If the status quo nuclear family is so strong, why do over half of marriages end in divorce? And why have our next generations fallen behind many countries in education? If this group of Republicans cares so much about the next generation, why does it not sink more energy and resources into our troubled education system?

Why does 're-defining' the construct of marriage scare everybody so much? It is shocking and saddening to me to see otherwise intelligent people be so ignorant! How can this be? Usually, on polarizing political issues, I am able to somewhat understand where both sides are coming from on an issue. But I am truly baffled by this one. What, exactly, is the problem with affording the same rights to same sex couples? The denial of these rights is unconstitutional. Period. I have yet to hear a sound argument that would justify this denial of rights.

One argument I’ve heard is that marriage is a religious office and as such is governed by the institutions which codify each union. But are not marriages often performed under the jurisdiction of the state alone? Non-religious heterosexual couples take vows at state courthouses every day. Marriage as an institution has become a cultural tradition, transcending religion and other original affiliations (such as the tradition of the wife being the property of the husband).

Another argument I've been offered is "marriage taking place only between a man and a woman is the way it's been for thousands of years- it's in the bible". First of all, when did we declare the United States to be an official tenant of the Catholic Church? Are we ruling from the bible, now? Secondly, the idea that our history of behavior should have more power than the evolution of culture is ludicrous. If we obeyed that kind of thinking, women wouldn't have the right to vote (or choose to marry whom they wanted, for that matter). I believe that we have to let our systems evolve with us, to retain the right to be called sentient beings.

To me, the anti-gay rights movement is madness. Someone please explain it to me. What is behind this denial of rights and why is remaining legal? I am waiting for an intelligent answer.
Posted by Meghan Wolf at 8:42 AM

If you have a gun not to your head but to someone's head that you love and potentially to everyone else that you love and care about, then maybe you can appreciate the position of understanding why these votes are not about choice but commands under a perceived threat and consequence that can not be negotiated, discussed and especially compromised, this is the deal breaker, this is the all or nothing, I wish it were a little more complicated but for about 5,000 years, at least there has been this impasse. As is, it is not about 'the right thing', it's about the Biblical god thing.

My question is why do people on both sides of this muddy the water by retreating to dogmatically held presuppositions?

I agree that the same rights / opportunities should exist for all people regardless of gender identity or sexual orientation.

I agree that marriage in the USA is ultimately a legal rather than religious status and that it is the legal rights that are being disputed and therefore the process should be address by the law of the land and the legislative process.

The challenge, of course, is that law is a cultural artifact that codifies and creates norms. Norms flow out of a particular worldview. In a pluralistic society conflict is inevitable because the law will always reflect the presuppositions of the worldview of the dominant group.

What's at stake here isn't simply, "Should gay women and men be allowed to be happy?" Or even "Should the state be equitable in dealing with heterosexual as well as homosexual people?" It's "Who gets to decide what it means to be human?" What are we? Why do we exist? What is the basis of moral decision making? What is the purpose for life?

What's driving opposition to the 'reconstruction' of marriage is fear that the cultural artifacts that have supported one worldview are being eroded and replaced. While you may celebrate this change, as a compassionate person certainly you can appreciate how disorienting this is to those who are committed to a particular way of seeing the world. No one likes to lose their house even if the they can't pay the mortgage.

The passion for change is admirable. I would urge those who strive for social change on the basis of tolerance, equality for all, and love to demonstrate those characteristics in their language and attitudes towards those who disagree with them. My dogmatically held presupposition is that people matter and deserve respect regardless of whether or not I agree with them. Love - JDG